In this paper, we propose least-squares images (LS-images) as a basis for a novel edge-preserving image smoothing method. The LS-image requires the value of each pixel to be a convex linear combination of its neighbors, i.e., to have zero Laplacian, and to approximate the original image in a least-squares sense. The edge-preserving property inherits from the edge-aware weights for constructing the linear combination. Experimental results demonstrate that the proposed method achieves high quality results compared to previous state-of-the- art works. We also show diverse applications of LS-images, such as detail manipulation, edge enhancement, and clip-art JPEG artifact removal.

In this paper, we propose a novel geometrical detail editing method for triangulated mesh models based on filtering robust differential edge coordinates. The introduced detail editing consists of not only feature-preserving denoising for removing scanner noises, but also interactive detail editing for weakening or enhancing some specific geometric details. Various detail editing results are obtained by reconstructing the mesh from new processed differential edge coordinates, which are filtered from the view of signal processing, in linear least square sense. Experimental results and comparisons with other methods demonstrate that our method is effective and robust.

Intrinsic symmetry detection, phrased as finding intrinsic self-isometries, courts much attention in recent years. However, extracting dense global symmetry from the shape undergoing moderate non-isometric deformations is still a challenge to the state-of-the-art methods. To tackle this problem, we develop an automatic and robust global intrinsic symmetry detector based on functional maps. The main challenges of applying functional maps lie in how to amend the previous numerical solution scheme and construct reliable and enough constraints. We address the first challenge by formulating the symmetry detection problem as an objective function with descriptor, regional and orthogonality constraints and solving it directly. Compared with refining the functional map by a post-processing, our approach does not break existing constraints and generates more confident results without sacrificing efficiency. To conquer the second challenge, we extract a sparse and stable symmetry-invariant point set from shape extremities and establish symmetry electors based on the transformation, which is constrained by the symmetric point pairs from the set. These electors further cast votes on candidate point pairs to extract more symmetric point pairs. The final functional map is generated with regional constraints constructed from the above point pairs. Experimental results on TOSCA and SCAPE Benchmarks show that our method is superior to the state-of-the-art methods.

Finding structure-preserving correspondences between pairs of shapes is a common operation in many geometry processing and applications. Usually the ambiguity of primary correspondences and symmetrical correspondences arises in the matching problem between two intrinsically symmetrical shapes. As intrinsically symmetrical shapes are ubiquitous, it is essential to handle this problem. In this paper, we present an approach to establish automatic sparse symmetry-aware correspondences between two shapes using graph matching. We propose a directed-angle scheme to capture the global structure of meshes. Then the graph matching is generalized to high-order potentials, which contains intrinsic descriptors, intrinsic distances and directed-angles among arbitrary three points in deformation-invariant embedding space of the mesh. Comprehensive experiments demonstrate that our method works well. 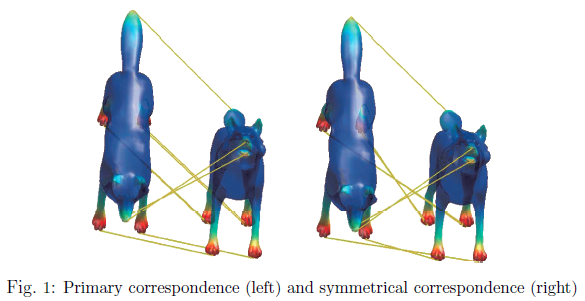 Empirical Mode Decomposition (EMD) is a powerful tool for analysing non-linear and nonstationary signals, and has drawn a great deal of attentions in various areas. In this paper,we generalize the classical EMD from Euclidean space to the setting of surfaces represented as triangular meshes. Inspired by the EMD, we also propose a feature-preserving smoothing method based on extremal envelopes. The core of our generalized EMD on surfaces is an envelope computation method that solves a bi-harmonic field with Dirichlet boundary conditions. Experimental results show that the proposed generalization of EMD on surfaces works well. We also demonstrate that the generalized EMD can be effectively utilized in filtering scalar functions defined over surfaces and surfaces themselves.